It’s a naming thing, pure and simple. Officially, the Toyota Matrix is a Toyota Corolla Matrix. As a result, added to the U.S. sales total of the Toyota Corolla is the Toyota Matrix. Granted, the Matrix isn’t a huge seller in the United States; but the Corolla’s total is helped by its inclusion. Similarly, the tall wagon at Honda known as the Crosstour is, as we all know, the Honda Accord Crosstour in official literature. So a small dose of tall wagon sales are added to the Accord’s U.S. sales total.

However, the Toyota Venza, basically a Toyota Camry tall wagon, is not known as the Toyota Camry Venza. For the purposes of this Best Sellers list, the Camry is left by its lonesome. That said, when it comes time for an April Graph on Midsize Car Sales in the USA, The Good Car Guy has decided that the Toyota Camry and Toyota Venza will be combined; partially for logical reasons; partially to save space. After all, Volkswagen Passat sales include both the sedan and wagon, right? Nobody wants to separate Honda Civic coupe and sedan sales in the Graph below, do they? So Subaru Outback and Legacy sales will be combined as well, and reaction will be gauged thereafter.

Six out of the Top 10 Best-Selling Cars In America are known as foreign cars. Chevrolet and Ford both manage to disrupt the Japanese (and Korean) domination, but only just. 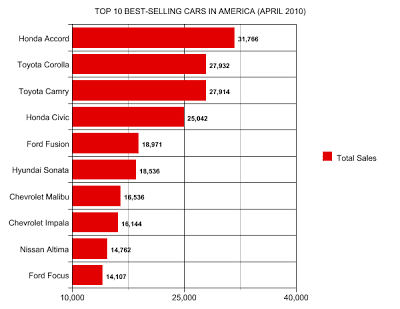