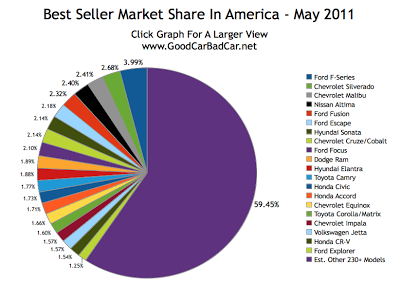 Home
Top Level Reports
Marketshare
Breathe…. Okay, now that you’ve gotten over the shock of seeing the Ford F-Series as America’s best-selling vehicle in America for the month of May 2011, we can get on with things. The big Ford truck family’s portion of the overall new vehicle market in the United States rose slightly from April’s 3.92% to May’s 3.99%. You could say this was helped by falling sales of what are normally the F-Series’ closest rivals: the Toyota Camry and Honda Accord.

15% of America’s 20 best-selling vehicles in May were trucks, 20% were utility vehicles, leaving 13 cars to fill in the gaps. Though those figures are identical to April’s, the vehicles helping to make up those figures are different. The Toyota RAV4 fell off; the Ford Explorer slid in.

Passenger cars formed 52.9% of the overall market in May, according to the Automotive News Data Center. 11 of the top 20 were Detroit machines in the traditional sense, up from 10 in April. The 20 best-selling vehicles in the United States gained strength, rising from 40.35% of all new vehicle sales in April to 40.55% in May.