Honda continued its reign of Canadian auto-selling dominance with a strong performance in November. Civic sales were nearly 700 higher than in November of 2008. To American observers, the most surprising character in this Top 10 has got to be the Toyota Venza, a vehicle not yet so accepted south of the border. The Venza out-sells the Toyota Camry, Honda Accord, Ford Fusion, and Nissan Altima in Canada.

Canada’s Top 10 Best-Selling Cars In November 2010
For addicts of the GCBC Awards, forgive this interruption. There’s a few Canada Auto Sales/Sales Stats/Graph posts yet to come over the next few hours before regular programming resumes with Part XI of The Good 12 v3.0 tomorrow morning. Check out October’s equivalent Graph here. Or grab the info on America’s best-selling cars here. 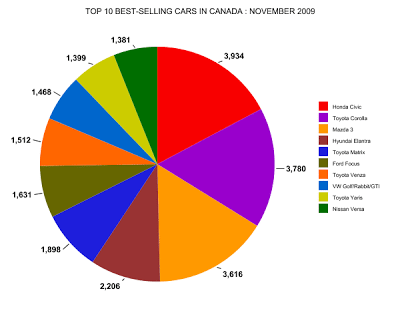