Kia and Subaru sales shot through the roof in the United States in the month which ended Monday. August buyers were aided by Cash For Clunkers and thousands of dollars in incentives provided by the manufacturers to go along with the government’s rebates on trade-ins. A quick look at August/2008’s Sales Stats will show Subaru to be the eighteenth-ranked brand in sales totals – here Subaru’s perched inside the top 10 best-selling brands in America.

Manufacturers not listed here which managed to post sales increases over that which was achieved in the eighth month of 2008 include: Audi, Volvo, Mazda, Volkswagen, Porsche, and Mercury. Saturn sales spiralled down more than 58%. Buick sales were not half of last August’s total. GMC’s total went from 42,194 last August to 23,145 last month. 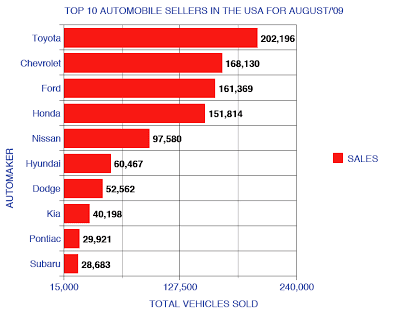