Every time Canada’s U-20 men’s hockey team lines up in late December at the World Championships, The Good Car Dad attempts to portray himself as a fan of the opposing team. Deep down, he wants Canada to win. But it lessens the pressure when he cheers for Russia or Sweden. Likewise, tens of thousands – tens of millions of Americans drive foreign-designed automobiles. Their car payments find their way into German or Japanese bank accounts. Yet the current success of Ford…. and even Chevrolet, is something they enjoy deep down in the core of their oil-filled veins.

Or is it? Sure, Ford sold more vehicles than anybody else in April. But Toyota sold nearly 140,000 vehicles, way more than that when Lexus is included. Both Korean brands, Hyundai and Kia, are in the Top 10, as you’ll see in the Graph below. Honda, Nissan, and Subaru wave the Japanese flag with Toyota.
Yes indeed, there’s plenty of positive talk goin’ round about Ford Motor Company and General Motors. Product lineups are decent. Debts have been repaid. Yet Americans haven’t lost their love for those furrin’ jobbies. More importantly, The Good Car Dad might truly be cheering against Canada. 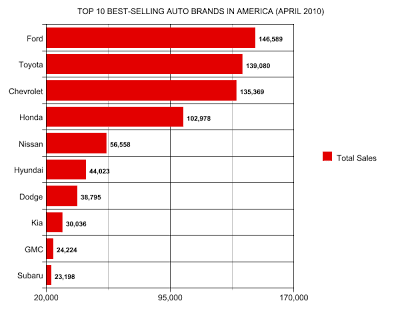