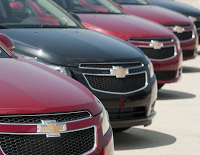 Tacking on the 2011 Chevrolet Cruze’s 325 sales isn’t necessary to make the Chevrolet Cobalt the best-selling American car in Canada for October 2010. The heavily discounted Cobalt can find #1 all on its own.

As for the 2011 Ford Fiesta, this marks two months in a row (that’s as long as The Good Car Guy’s been keeping track) in which it was the #5 car on this list. After four months on sale, the Ford Canada’s Fiesta growth has finally hit a bit of a wall. July Fiesta sales were at 386, then 610 in August, 907 in September, and 868 in October.