Home
Auto Brands
Honda
Four direct competitors took home the top four spots in Canada’s best-selling cars list for 2009. After those first four, two more direct competitors of one another – one size class down – grabbed hold of the fifth and sixth spots. In eighth position, a direct competitor for the first four appears in front of two mid-size contenders.
So which segment dominated Canada Auto Sales figures in 2009? The Graph below clearly shows C-Segment cars, compacts as we call them, as a force to be reckoned with. If volume is your goal, offer an automobile in the $15-$24K range somewhat smaller than the typical American best-seller, Toyota’s Camry. Despite calls for a reinvigorated model range, the Honda Civic is once again the best-selling car in Canada. Toyota managed to stuff three cars into the pie chart; Hyundai and Ford each managed two. Honda book-ended the Top 10 Best-Selling Cars list for 2009 with the Accord while Mazda’s desirable 3 landed easily in bronze medal position. Have a look at the best-selling cars in the USA here. 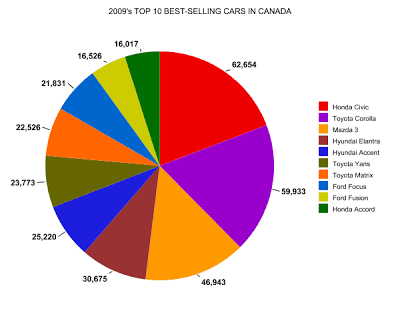