Of all Toyota-badged passenger cars on sale in America, the Avalon was the slowest-selling model in May. Is that a sign of the times or a sign that Avalons aren’t the most desirable cars to hit the pavement? Consider this: although Ford Taurus sales jumped 98% in May, the Taurus was still the slowest-selling Ford in America barring the even larger Crown Victoria. Maybe large cars just aren’t appreciated.

Well, the Nissan Maxima out-sold the Cube, 370Z, and (not surprisingly) the GT-R in May. Chrysler’s 300 sold in greater numbers than the midsize Chrysler Sebring. And the Charger was Dodge’s best-selling car last month. Further proof could be provided that large cars can sell in struggling economic times, times in which fuel costs form a worrisome part of the public consciousness. As far as the Toyota Avalon, it ain’t pretty. Besides, parked next to it in the showroom is America’s perennial best-selling car.

The Graph below isn’t so much a direct comparison of big cars as much as a manifestation of the challenge dealers must overcome to sell a handful of big cars. The Cadillac DTS doesn’t compete with the Chevrolet Impala; to see the DTS coming up short in that light means nothing. Yet to see the vast majority of these cars come up short in comparison to their respective smaller brethren is certainly a change from the 1960s. 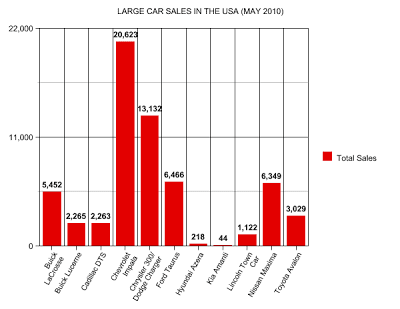