BMW 7-Series sales in Canada have risen 30% compared with the first seven months of 2009. Sales of the big, bad Brit – the all-new 2010 Jaguar XJ – have skyrocketed northward with an improvement of 123% year-to-date compared with 2009. Of course, 89 total sales isn’t much to write home about, but an improvement is an improvement. Not to belabour the point, but Canadian sales of the Mercedes S-Class (which includes the CL-Class) are up, as are Porsche Panamera sales (since there were no Panamera sales in 2009). Audi Canada’s A8 sales are down so far, and Lexus’s LS is off 13%.

Among mainstream Large Car Sales, the smell of success is wafting by, as well. Buick LaCrosse sales are up (but were down slightly in July). Both year-to-date sales and July 2010 sales of the Buick Lucerne have jumped up nicely. At Chrysler, the 300 is doing better than 2009 by three units, and the Dodge Charger has posted 47% gains.  Up 143%, Chevrolet Impala volume is surely assisted by fleet sales – yearly volume is up scantly. Ford Taurus sales have increased 200% from 2009’s 7-month total. Japanese brands have contributed to the increase, as well: both the Nissan Maxima and Toyota Avalon are selling better this year than last. Kia is awaiting the Cadenza; Amanti volume is off by 56%. The disrespected Cadillac DTS and Lincoln Town Car are having off years, as well, no doubt about it.
Details on every large automobile for sale in Canada are in the Graphs below. 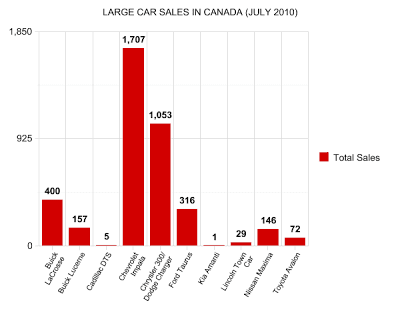 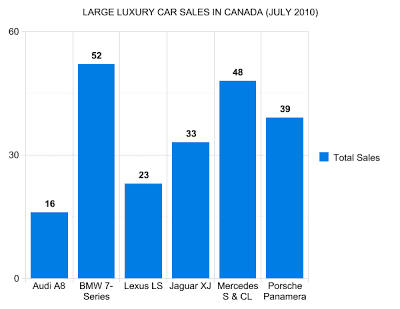