Thankfully, that’s not the way Toyota Canada generates its reports. For the purposes of the Graph below vehicles like the Matrix, Kia Soul, Nissan Cube, and Chevrolet HHR are left off in order to more adequately display true rivals. The fact most obvious when glancing at the Graph below is the Marketplace weakness of midsize sedans in Canada. Honda Civics sold nearly twice as often as the Honda Accord in March. Mazda 3 sales make the Mazda 6 look downright exclusive. By the way Mitsubishi’s Lancer comes across you’d be under the impression Mitsubishi forgot to put the Galant in its brochures.
Smaller. Lighter. Cheaper. Apparently, that’s the Canadian way. 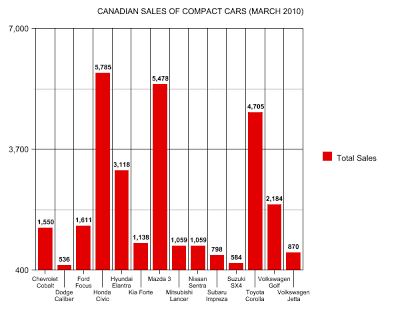