Very few people would argue with the man who makes a point about the 2010 Honda Fit being superior to the 2010 Hyundai Accent. More refined, more fun to drive, roomier, and at least as fuel efficient, the Fit is by no means handsome but stands out from the pack. The Accent, a car The Good Car Guy recommends with alarming frequency, is pleasant enough and warrantied up to the hilt. Plus, it’s ridiculously inexpensive and frequently available with low, low, low financing.

The Good Car Guy would go so far as to say that, barring a little more knowledge of the Ford Fiesta and Mazda 2, the Honda Fit is best-in-class. Yet over the 31 days of last month, July 2010, Canadians acquired 2733 Hyundai Accents and only 477 Honda Fits. There is but one explanation for this frequent phenomenon: price. To find a Honda Fit with air-conditioning and an automatic transmission, you must spend at least $16,980. Over at the local Hyundai dealership, you can have air-con and an auto trans for $13,949. Hyundai will finance that car interest-free for five years or at 0.99% for six or seven years. At Honda, you’re more likely to be charged 5.9% interest.
Why are we making this point? There are no automotive categories more price-sensitive than the subcompact segment. Dearborn’s Blue Oval, like Honda, has priced their car, the 2011 Ford Fiesta, far beyond the best-selling car in the class. Air-conditioning isn’t even an option on the base sedan. Will Ford’s Canadian sales volume of the Fiesta rise beyond this early hurricane-afflicted, basement-dwelling 386? For sure, but it won’t be up in Versa/Accent territory until Ford drops the price.
As for compacts, the sway of price isn’t quite as substantial. Deeply discounted Chevrolet Cobalts and Ford Focuses sold well in July 2010, but the best cars in the class, Honda’s Civic and the Mazda 3, continued to sell well with weaker promotions. Details on every single subcompact and compact car competing in the Canadian marketplace are in the Graphs below. 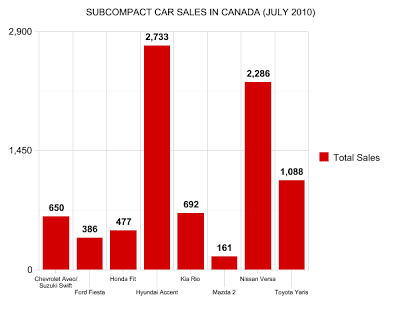 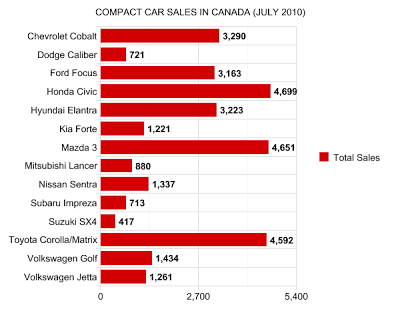