Apart from the budget-priced Chevrolet Impala and the combined sales of the Chrysler 300 and Dodge Charger, sales of large sedans in Canada last month weren’t much to get excited about. Hearing the words, “April of 2010” next to large sedans doesn’t really seem all that normal anyway, right? I mean, talk at Ford isn’t of the Taurus; it’s all in regards to the upcoming Fiesta, a much smaller vehicle.

That said, sales of the Chrysler 300, Dodge Charger, Buick Lucerne, Buick LaCrosse, Ford Taurus, Nissan Maxima, and Toyota Avalon were all higher in April 2010 than in April of 2009. Could the era of large sedans be on its way back? With quality vehicles like the LaCrosse and Taurus it wouldn’t be hard to imagine it. And I did hear about the regulated fuel prices in Nova Scotia falling three cents this morning…. 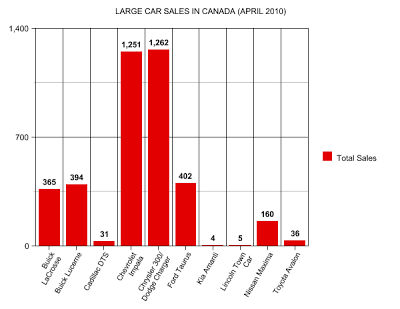