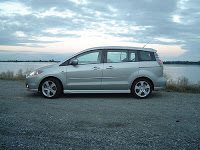 Tell me something. When your child, boy or girl, comes home from school and says, “Mom! Dad! I saw the coolest car today. Can we buy a Mustang GT?”, how do you respond? My guess is you say no. I am likely correct.

But, for one second, could we just consider a car purchase from the youngster’s perspective? On the most recent test drive I took I was the backseat tester. No, not backseat driver, just tester. I decided I would let my good friend do the driving, and my wife and I would consider what a Mazda 5 was like from the rear-most inhabitants outlook. What’s it like back there? How’s it feel back there? What kind of life did I lead when I was 7 and in my mother’s Grand Caravan?

This is something different altogether, the 5. In Europe, miniature minivans, or MPVs to those on the Continent, are huge hits. Renault offers 5 MPVs altogether, and three of them are sized like the Mazda or smaller. Opel/Vauxhall makes the popular Zafira, which seats seven. Ford is in the game with the C-Max, and VW offers the Touran. You see what I mean, everybody’s got’em.

Now Mazda wants to try out the segment on this supersized side of the pond. People here drive Suburban’s, Sienna’s, and Odyssey’s, but will they like the smaller and less capacious 5? I decided to find out from the viewpoint of the people who caused their parents to need such a vehicle.

Here’s what I discovered. Firstly, the middle row of the six-seater is incredibly spacious, whether you’re talking legroom, headroom, or even arm/hip room against the door. If there is nobody behind you in the rearmost row, you can slide the middle seats back to further yourself from the driver and front passenger. All in all, the second row gets my recommendation.

Secondly, the 5 lends itself to being seen out of very well from all angles and all seats. The windows are large, and the car (I hate to call it a van) isn’t actually all that large, which you’ll find out if you park it side-by-side with the already small Mazda MPV. So to the kid who always misses the moose on the Cabot Trail, or who doesn’t even notice he is on the Golden Gate Bridge , I’ve found the place where your carseat needs to go.

Next is the third row, more of a split bench than the front four seats. To be honest, this isn’t a place where I would want to spend a lot of time. Then again, I’m a mighty large child at nearly 6 feet and double the weight of a big kid. So, in this case, you kind of need to suspend the importance of my thoughts. Beneficially, you can seat the tallest of those people allotted the third row to the right side of the vehicle, so that the front passenger and the middle right passenger can slide ahead. Then put the smaller passenger in the left side, behind those who require more space. Got it? The first problem in the 5 is that you’re tempted to carry five or six passengers on a trip, but you can’t, because there ain’t no room for yo’ luggage. So as I said to my driver, we must not think of the Mazda as a six-passenger cargo hauler. It’s a sextet people hauler, or a four passenger cargo hauler. And it will certainly carry a bunch of stuff when you equip it for four by easily folding down the third row.

Folding is an altogether easy thing in the 5, with the five passenger seats all going down, four of them perfectly flat. Finally, driving impressions, er… riding impressions. We were in an automatic (yes, a manual is standard equipment even in this MPV) and it was only found a little breathless navigating a steep on-ramp. Albeit, that was purely from my inherent g meter – the driver found it fine. The manual would be quicker and better on fuel, to boot.

The ride/handling compromise was favourable. It’s likely the most fun to drive tall-roofed six-seater you can buy, even from my backseat position. The suspension is designed for smoothness, but roll is kept in check. Very nice. In other words, if a kid sees a Mazda 5 at school, and dares to ask for one, you might even like it more than he or she does. This is one of the first attempts to bridge this gap in the market, and it comes in at a price that happens to be very attractive, considering the safety and convenience features that come standard.
Everything you’d expect to be powered is, and 4-wheel discs and ABS slow everything down, all for around $20,000 CDN. The 2.3L 4-cylinder is the only powerplant, and the 157 horses the engine produces are suitable in a vehicle of this size. If you want similar space in a Mazda, the 6 wagon comes only with the V6. Besides, it’s just a five-seater.

So why do I mention the kids coming home from school and asking for a new car? Well, they may just ask for a 5 after they see that it is in the van configuration that Ma and Pa want, but with the sleekest, stylish, and most svelte looks to land on an MPV since I don’t know when. It ticks all the boxes.