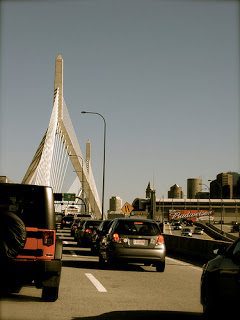 Auto Sales By Segment In The USA And Canada – March 2011

After a trip south of the border, Canadians never cease to mention the huge number of trucks and sport-utility vehicles on American interstates. Based on March 2011 sales figures, however, it’s the Canadian bunch which possesses the propensity for purchasing pickup trucks.

Seen in pie chart form, the difference between the Canadian and U.S. auto markets is stark but not at all what you’d expect based on Canada’s higher fuel prices and higher vehicle prices. Nevertheless, when split up more thoroughly – as has been done all month on GoodCarBadCar.net – the smallest models make up the vast majority of Canadian car sales. Three in every ten new vehicle sales in Canada in March were part of this Graph. In the United States, on the other hand, the best-selling car is almost always a midsizer.

Just to clarify, the green “other” section of the U.S. Graph below is filled with defunct models which no longer appear in GCBC’s charts like the Ford Crown Victoria and Kia Rondo as well as brands like Maserati which don’t offer a model-by-model sales split. Those sorts form an inconsequential portion of the Canadian market.

And how ’bout them Sprinters and Econolines? 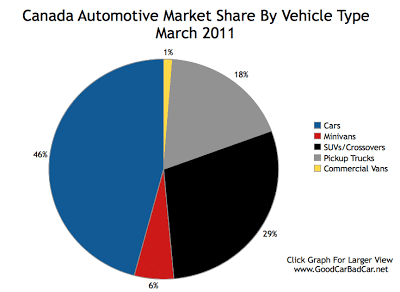 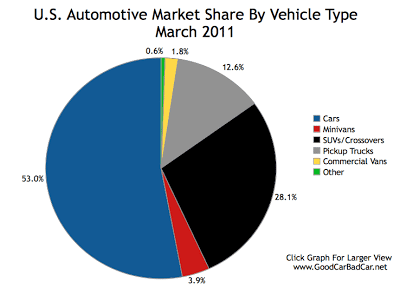