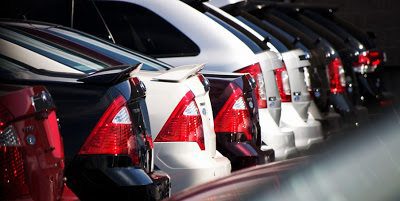 Auto Sales By Segment In The USA And Canada – April 2011

Who buys more trucks? Canadians, or Americans? You’d be forgiven for assuming it was the Texas-encapsulating United States, particularly if you hadn’t read last month’s version of this post, but you’d be wrong.

This is all relative, of course. In April 2011, U.S. residents, governments, and fleets of all kinds picked up 139,411 pickup trucks. In a market that’s seven times smaller, Canada is now home to 26,255 more trucks than it was at the end of March. Yes, the U.S. has ten times the population, an auto market that’s generally around seven times the size, but bought barely more than five trucks for every truck purchased north of the border. It’s interesting, especially given the average price of fuel in Canada: near $1.40 per litre. That works out to $5.59 per gallon in the U.S. at current exchange rates, some way above the $4.00/gallon average.

So, Americans buy trucks in greater volume, but in the context of their market dimensions, Canadians buy more trucks.

Sport-utility vehicles and crossovers pretty much made up the same percentage of overall vehicle sales. Minivans are certainly more of an acceptable purchase in Canada than in the United States. “Other vehicles” – commercial vans and defunct models like the Suzuki XL7 – are bit players in both nations.

This leaves traditional passenger cars. 53% of all U.S. new vehicle sales in April were cars. Fewer than half of all new vehicle sales in Canada were cars. And there the story diverges down different paths again. In Canada, car sales are dominated by small models like the 2012 Honda Civic and Toyota Corolla. Meanwhile, 60% of America’s 10 best-selling cars in April were larger than small.

According to the Automotive News Data Center, Canadian auto sales totalled 160,091 in April; U.S. sales reached 1,157,928. The Graph breaks everything down in simple slices. 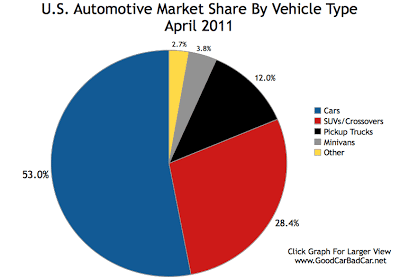 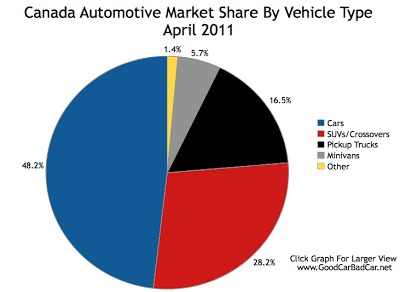