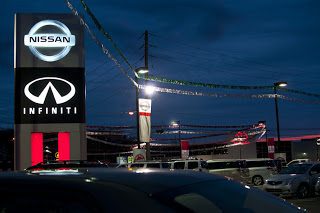 General Motors, Ford Motor Company, and Nissan Canada all made significant market share gains in June 2011 at the expense of most other automakers. GM made its way from 15.4% of the overall new vehicle market in May to 16.9% in June thanks to year-over-year increases from each of its four brands. Lincoln sales fell 23.3% but FMC’s foundational Ford brand jumped 6.6%, helping Dearborn’s share of the Canadian market increase to 17.1% from 20.3%. Nissan, with its best month ever – and despite declining Infiniti sales – improved its market share from 4.5% in May to 6.9% in June.

May was a month where we really began to see the full impact of poor supply in the showrooms of Japanese brands. While you can still hear voices singing that song, we should acknowledge that Toyota’s troubles and Honda’s woes came at a time when Chrysler had significantly improved much of its lineup, Ford went and got all car-centric, and GM threw together an all-around decent lineup across the board. In other words, there’s no single magic bullet diagnosis that explains why Toyota Canada’s market share fell more than a full percentage point from May to June, and Honda dove from 6.6% to 5.8% in the same period.

Even Hyundai/Kia, with vastly improved year-over-year sales and a best-selling Elantra, couldn’t dominate in the marketplace like Ford Motor Company or General Motors. The Koreans’ market share in Canada slid from 14% in May to 12.4% in June 2011 despite volume which shoved Honda and Mazda into subordination.

GoodCarBadCar.net’s Canadian automaker market share chart for June 2011 is below. 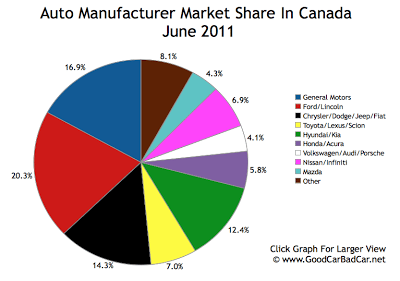