The distinctive front end of the 2011 Ford Edge is becoming increasingly common on Canadian roads late this September. Before the 2011 Edge became so popular, the 2010 Ford Edge was (and is) available with attractive discounts. Good deals on a decent vehicle produce strong Sales Stats. Ford Edge sales increased 45% in August 2010. For the year, Edge sales are up 31%. The Edge is Ford Canada’s sixth-best-selling vehicle.

Combined, General Motors’ three Lambda-platform crossovers out-sold the Edge…. by four units. Chevrolet Traverse sales were up 161% to 621; GMC Acadia sales rose 80% to 402; Buick Enclave sales rose 46.7% to 352.
News at Toyota wasn’t so great. Though 4Runner sales increased from August 2009’s total of 40 to 179, sales of the once-popular Highlander plummeted from 519 to 257. August sales of the Toyota Highlander were level from 2008 to 2009 but were as high as 644 in August 2007. Perhaps the tide will turn for Japan’s largest automaker once the 2011 Toyota Highlander starts making appearances at dealers across North America.
All that said, Toyota’s luxury Highlander equivalent, the Lexus RX, remained the best-selling midsize luxury SUV in Canada in August. On the other side of that ledger is a note that says RX sales suffered greatly in August; down 24% from August 2009. At least Lexus hangs on to that best-seller title. Volkswagen Touareg sales went from a low 77 last August to a very, very low of 18 in August 2010.
Details on midsize SUVs of every stripe are in the Graphs below. 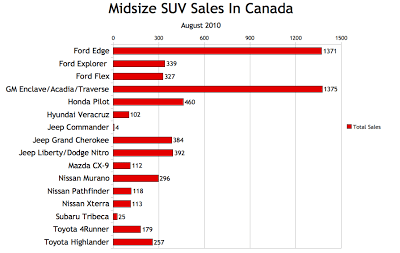 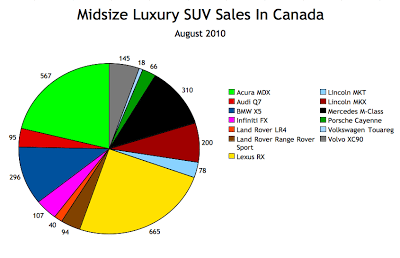