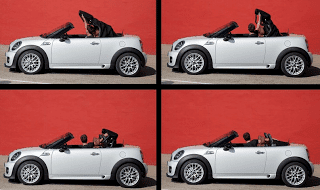 For the first time ever, in the long history of the Mini Roadster, the two-seat softtop Mini outsold the two-seat hardtop Mini Coupe in the United States.

The Roadster’s been on sale since February.

Mini’s U.S. dealers sold five more Roadsters than Coupes in August 2012. In the last full month of summer, Mini USA sold a total of 644 droptop Cooper Convertibles and Roadsters. Assuming Fiat USA’s hardtop/convertible ratio is approximately the same as Fiat Canada’s (where 24.3% of the Cinquecentos sold in August were convertibles), we can figure on around 1000 500C sales last month in what was Chrysler’s best U.S. Fiat 500 sales month so far. 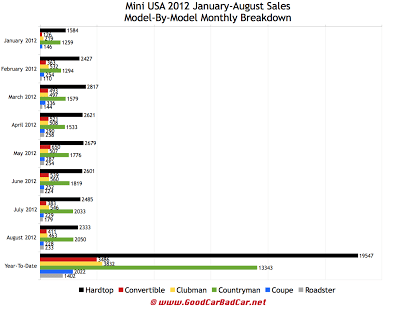 Overall, the news at Mini USA was a real bright spot for BMW of North America, LLC, as sales at the parent brand plunged 19.1% in August. In fact, if we exclude the new-to-America X1, a SAV which wasn’t on sale a year ago, equivalent BMW sales actually dropped 21.6%. The 6-Series was the only BMW passenger car with improved year-over-year volume. The X3, X5, and X6 improved 19%, 21%, and 5.5%, respectively.

The above chart, which you can click for a larger view, breaks down Mini’s U.S. sales volume by specific model. It would be nice to know the S and JCW totals, as well, but the data Mini USA does make available is fortunately much more informative than the information provided by many automakers.