He who drives a 2011 Audi R8 5.2 likely has a great deal of opportunity to drive a Porsche 911 or even a Mercedes-Benz SLS AMG. He (or she) may even have another premium-priced sports car in their garage alongside the V10-engined Audi R8. Yet, for any one or ten of a million possible reasons, s/he decided to sign on the dotted line to take an R8 home. To the Toronto suburbs.

In fact, 23 residents of Canada drove an Audi R8 off the lot in August 2010. Last August there were 32 R8s sold, but 23 isn’t a bad number in light of the Mercedes-Benz SL-Class’s 15-sale August. The SL-Class Benz has farther reaching appeal. It’s always a convertible; always a coupe; available with a handful of different but always powerful engines. SL-Class sales were down in August 2010 and are down slightly year-to-date, as well. The same can be said for Porsche’s 911. BMW 6-Series sales are way off last year’s pace, down from 142 in the first eight months of 2009 to 45 so far in 2010. Nissan GT-R sales are about half what they were in 2009. Cadillac sold its first XLR of the year in August.
Blame the SL-Class’s failings on the SLS AMG. Priced in the same stratosphere, the SLS AMG possesses dramatic gullwing doors and a driving experience meant to light a fire underneath the driver’s seat. Mercedes-Benz Canada has already sold 77 SLS AMGs.
Among significantly less expensive machinery, German cars are still lusted after by many. As far as purchases and leases go, August 2010 wasn’t a high-volume month for the Audi TT, BMW Z4, Mercedes-Benz SLK, Porsche Boxster, or Porsche Cayman. TT sales actually rose from 28 last August but are down year-to-date. Performance and comfort can be found in the Hyundai Genesis Coupe, a car buyers flocked to at a rate 8% up from August 2009.
Keep in mind, before analysing the details in the Graphs below, that Volkswagen GTI sales are new to this chart (as are the Honda CR-Z’s) but GTI sales are lumped in with the Golf in other GCBC Sales Stats like the Best-Selling Cars list and Compact Car Sales Graph. 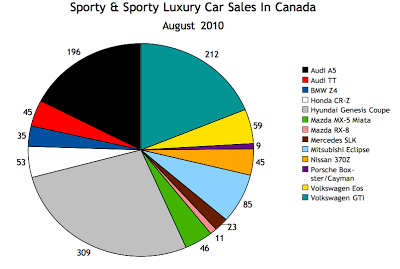 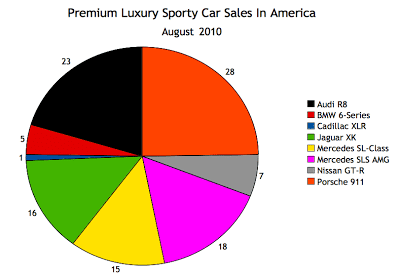