A million comparison tests may have gone its way, but customers still turn to the (sometimes) less-expensive Porsche 911 more readily than the Audi R8… at least in Canada, at least in April.

News for sellers of the Audi R8 in Canada last month was actually much better than just, “We lost to the 911 again”. Audi R8 sales doubled from April of 2009. In fact, of the cars mentioned below, only the ageing BMW 6-Series suffered severely declining sales compared with April of 2009 (Benz SL-Class sales were down slightly from 35 to 30).
As for the indomitable Porsche 911, sales through April of this year are up from 166 to 209; April sales rose from 57 in 2009 to 92 this year. I believe the phrase is, “Oldie but a goodie”. 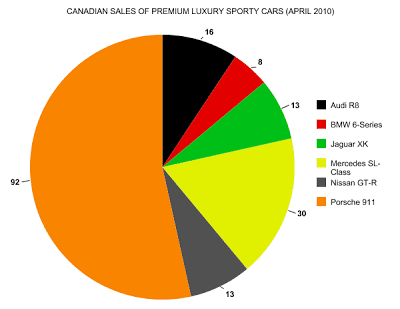