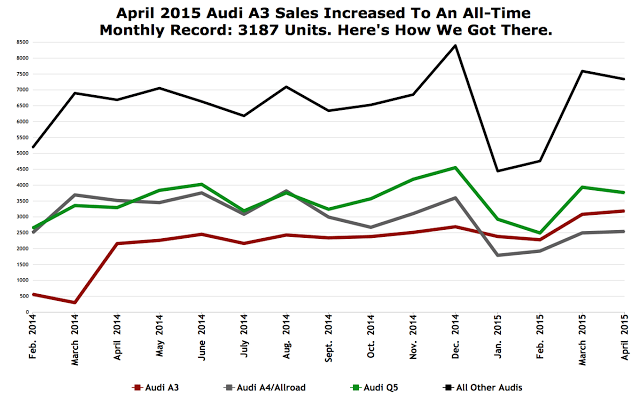 Audi USA reported 3187 total A3 family sales in April 2015, a 48% year-over-year increase compared with the first month in which the latest generation of A3 was readily available (April 2014) and 106 sales better than the previous best month of March 2015.

The A3 – which takes into account the sedan and convertible with all powertrains and the S3 – was Audi’s second-best-selling model in both April 2015 and the first four months of 2015. It accounted for 19% of all U.S. Audi sales in the first one-third of 2015 and in its record-setting month of April.

Subtract the A3 from the Audi equation and brand-wide Audi sales were up just 1.1% in the A3’s record-setting month. But with the A3 included, Audi sales jumped 7.5% to 16,827 units, the best April ever for the Audi brand and the 52nd consecutive month in which the brand reported record monthly sales.

Meanwhile, Audi Canada also reported record A3 sales last month. With 548 Canadian sales, the A3 accounted for 17% of Audi Canada volume. And what are we driving this week? Visiting GCBC Towers is a blue Audi S3, pictured above.