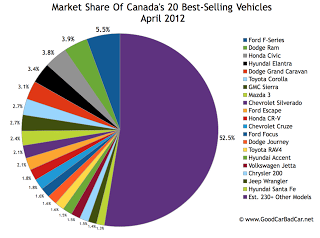 Canada’s 20 best-selling vehicles accounted for nearly 48% of the new vehicles sold in Canada in April 2012. The Ford F-Series alone was responsible for 5.5% of the market, although that was down from 6.2% in March. Canada’s third-best-selling vehicle and best-selling passenger car, the Honda Civic, represented just under four out of every 100 April new vehicle sales.

Four of the vehicles in the top 10 were pickup trucks. Those same four trucks needed 12 spots to get their fill in the previous edition of this post. Other than the best-selling F-Series, those trucks were selling at a faster rate this April than they did a year ago. F-Series sales are up 7% through the first four months of 2012.

Compared with March, the very new Mazda CX-5 fell from 24th position to 29th. CX-5 supply remains low. As inventory picks up, expect the CX-5 to be a mainstay on this list and the best-selling SUV/crossover list.

Hyundai and Kia combined to land seven different nameplates on this list of Canada’s 30 best-selling vehicles. The close relation duos – Hyundai’s Sonata and Kia’s Optima; Hyundai’s Accent and Kia’s Rio – combined for 3741 and 3964 sales, respectively. Toyota USA would say that Toyota Canada sold 5680 Corollas in April. Toyota Canada, however, considers the Corolla and Matrix to be separate entities. Toyota USA would also say the Prius found 1422 Canadian buyers in April. But Toyota Canada sees the Prius, Prius V, and Prius C as their own machines. The best-selling Prius variant in April was the C hatchback, 556 of which were sold.

Sales figures for these 30 best-selling vehicles and the other 200+ models which represent the other half of the Canadian new vehicle market can be accessed through the dropdown menu at the top right of this page. Key links that will direct you to other best seller posts are clickable at the bottom of this post.