North American automotive consumers value the size of a vehicle’s footprint over the quality of the vehicle itself. No, we’re not talking about quality in terms of reliability and durability, but the inherent excellence of a car.

See, a European consumer looks at one car with a small engine, great fuel economy, luxury features, terrific handling, and a premium badge and likes the car even though it’s lacking interior space and overall grandeur. The North American consumer prefers their car with a little more torque from a slightly larger engine, decent fuel economy, and boatloads of space for friends and family even though this car is by no means luxurious, fun-to-drive, or premium in any way. The result? Sales of the four vehicles in the Graph below, the smallest of luxury cars in North America, are pitifully low.
Only 593 people in America took possession of an Audi A3 last month. Although slightly less expensive than the 2010 Toyota Prius V – and certainly a whole lot cooler – the A3’s sales pale in comparison to those of the Prius. Don’t herald the Prius’s fuel economy too much; the Audi A3 can be bought with a turbocharged diesel making it a 42mpg highway car. Over at Audi’s parent company, the Volkswagen Jetta is a far more popular car in North America. But a well-optioned Jetta SEL is verging on A3 territory. Most U.S. buyers will still turn their eye toward the regular ho-hum sedan, not the small luxury car.
Chances are the best way for Audi, BMW, Volvo, and Lexus to increase sales comes from higher fuel prices that’ll drive 7-Series buyers in to a 5-Series, 5-Series buyers down to a 3-Series, and 3-Series buyers down to the 1-Series.  Which, of course, results in dwindling profits, as well. Quite the conundrum. 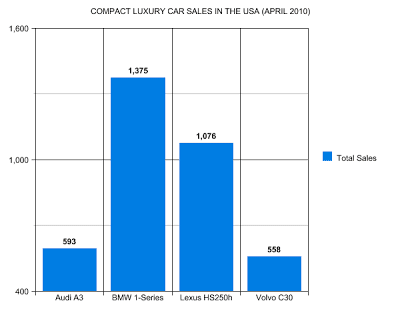