To save space and to recognize the achievements of a couple hot-selling wagons, The Good Car Guy began (in this Graph only, not in Best Sellers lists) to link the Toyota Venza with the Toyota Camry and the Subaru Outback with the Subaru Legacy. It makes sense to include the Outback and Venza, as vehicles like the Volkswagen Passat Wagon and Honda Accord Coupe and Crosstour are predetermined to be accepted members of the segment, so why not wagon versions of other midsize cars? We’d certainly do so automatically if Toyota called the Venza the Camry Venza (as they do with the Corolla Matrix) and if Subaru still called the Outback the Legacy Outback as Fuji Heavy Industries once did. Arguments against doing so are easy to come by, but a decision’s been made. You’ll survive.

For its part, the Toyota Venza is one of Canada’s most popular cars. 1,058 sales in April weren’t enough to get it on the Top 10 Best-Selling Cars In Canada list, but as a member of the Camry’s joint task force, Toyota could be selling Ford on the need for a Fusion wagon.
April of 2009 wasn’t the brightest time for selling automobiles the world over. However, the recession didn’t blanket Canada as harshly as it did the United States and new vehicle incentives were advertised everywhere. To see declining sales of the Nissan Altima, Mitsubishi Galant, Volkswagen Passat, Toyota Camry, Mazda 6, Kia Magentis, and Honda Accord isn’t so surprising then. The brand new Hyundai Sonata is a hot seller and sales of four domestic products – Chevrolet Malibu, Chrysler Sebring, Dodge Avenger, and Ford Fusion – improved in April 2010. 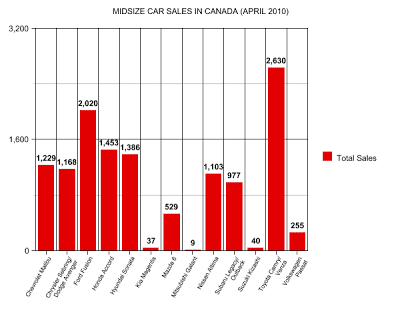