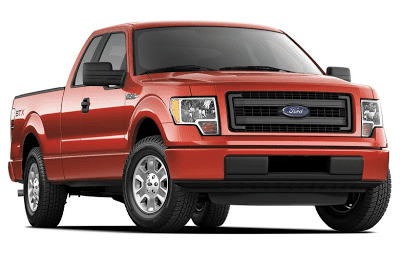 For the sixth consecutive month and for the seventh time in 2013 Ford sold more than 60,000 F-Series pickups in the United States. Ford only accomplished this feat once last year and once in 2011. 2010’s best F-Series sales month, December, resulted in 54,888 sales.

With December sales typically being the strongest, history suggests F-Series sales two months from now will be between 22% and 30% stronger than they were in October. 75,000 F-Series sales certainly seems possible in December.

In case you hadn’t guessed, the F-Series was America’s best-selling vehicle in October 2013. It feels like a very long time since the Honda Civic unseated the F-Series… in May 2008.

Compared with the list of America’s 30 best-selling vehicles one month ago, the Chrysler Town & Country is the only vehicle not present in October. It was knocked out of the top 30 in favour of the BMW 3-Series.

Half of America’s 30 favourite vehicles are sold by the Detroit Three. Five are pickup trucks. There’s also one minivan and nine SUVs and crossovers. The remaining nameplates are passenger cars.

Historical monthly and yearly sales figures for any of these best-selling automobiles can always be accessed through the dropdown menu at GCBC’s Sales Stats page, and for those not viewing the mobile version of this site, near the top right of this page, as well. The + icon has been removed from year-over-year improvements. Look instead for red font to designate year-over-year declines. We’ve also added prior year data, so you’ll spend less time hunting around GCBC for historical figures.

GCBC has already published rankings for 36 different brands and 14 different trucks and 20 SUVs and crossovers and 20 passenger cars. Below, you’ll find a list where all vehicles of all types are thrown in together: the 30 most popular vehicles in the United States in October 2013.

Source: Automakers
Red font indicates year-over-year declining sales
* Until BMW separates 3-Series and 4-Series sales in their own release, we can’t separate them, either, as BMW is up until now refusing to separate the two.
^ Prius breakdown by variant.