As it ended 2014, so it began 2015: the BMW 3-Series and its 4-Series offshoot formed America’s best-selling luxury auto lineup in January 2015. Outsold by 779 units was America’s top-selling luxury utility vehicle, the Lexus RX. 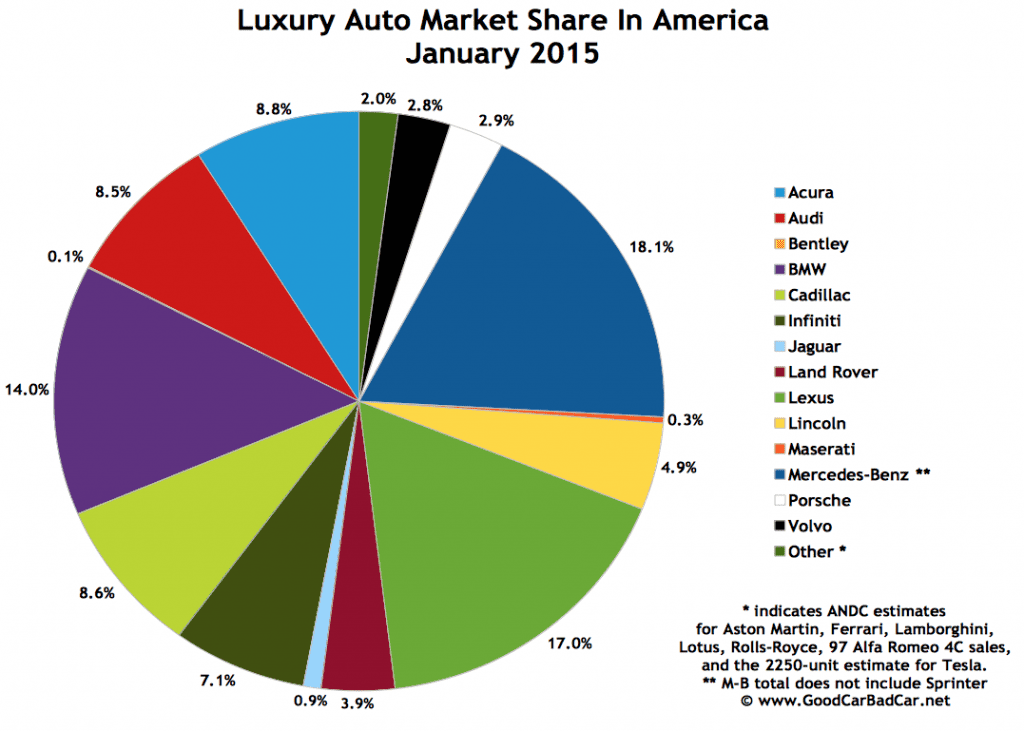 The RX achieved a 17% year-over-year improvement despite sitting alongside a newer, more affordable competitor in its own showroom. Lexus also sold 2812 copies of the NX in January. Together, the RX and NX accounted for four out of every ten Lexus sales last month.

Only two of America’s top 15 best-selling luxury nameplates reported year-over-year declines in January. Both those vehicles, the Mercedes-Benz E-Class and the Cadillac SRX, are in the midst of downward trending streaks. E-Class sales have tumbled in six consecutive months. The SRX’s January drop was its seventh in a row.

Source: Automakers & ANDC
$45,000 USD (before delivery) is an arbitrary borderline, but if GCBC was to follow this system of designating only expensive vehicles as luxury vehicles, adding approximately $15,000 to the average new car transaction price seemed like a fitting place to begin. Plenty of less expensive vehicles with specific models feature prices above $45,000 – M, RS, and AMG models come to mind, specifically – but in the case of the second list, we know that none of the registrations were of cars priced at $32,750, as would be the case with the new BMW 320i, which costs less than a Honda Accord V6 Touring. The biggest problem with a $45,000 minimum price of entry? Cars like the Cadillac XTS, which starts at $44,660.
* BMW USA, not GoodCarBadCar, has chosen to combine sales of the 3-Series and 4-Series. GCBC combines sales of the Audi A4 and Audi A4 Allroad. None-Allroad sales were down 29% to 1563 in January.
Cadillac’s new CTS – 1698 January sales – starts at $45,100, but the lingering CTS Coupe is a sub-$40K car, and the wagon starts at $42,195.