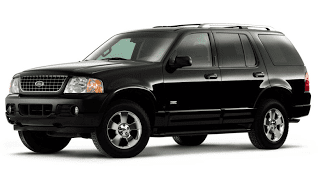 Top 40 Best-Selling Vehicles In America In 2003

America’s new vehicle market shrunk by 1% in 2003. More than half the vehicles appearing on this list of best sellers reported declining sales compared with 2002.

America’s three best-selling vehicles were also America’s three best-selling trucks in 2003. All three – the top-selling Ford F-Series, second-ranked Chevrolet Silverado, and the fastest-rising Dodge Ram – posted year-over-year gains. America’s four most popular cars did not fare so well. The top-selling Toyota Camry was down 5%, Honda Accord sales slid by less than 1%, the Ford Taurus dropped 10%, and the Honda Civic was down more than 4%.

Remember 2003? America went to war in Iraq, SARS wreaked havoc, Finding Nemo grossed $340 million in North America. And the Ford Explorer was the best-selling SUV in the United States. Sales were down 14% from 2002, however. The Chevrolet TrailBlazer, Jeep Grand Cherokee, Chevrolet Tahoe, Ford Expedition, Ford Escape, Jeep Liberty, Honda CR-V, Chevrolet Suburban rounded out the top ten list of best-selling SUVs. That’s nine Detroit sport-utilities and one Japanese cute-ute. In 2010 there were four Detroit SUVs among the top 10; none bigger than the Chevrolet Traverse. Moreover, the Honda CR-V was the best-selling SUV in America in 2010.