Scroll down to the Graphs below and you’ll find 90% of Canada’s best-selling cars. Only the Ford Fusion fails to appear here, it being a midsize sedan and these Sales Stats focusing on subcompacts and compacts.

We’re not far from a brand new Hyundai Accent, but the current model is selling like it’s going out of style. Which I guess it is, come to think of it. It’s hard to understand how the fun-to-drive and practical Honda Fit does so poorly in the Canadian market. Well, it’s hard to understand until you discover its base price: $4,481 higher than the Accent’s base price. For every Honda Fit sold in Canada in May, 4.79 Hyundai Accents exited Hyundai dealers. Makes you feel bad for the guy who only got 80% of an Accent, though.
True volume is seen in the compact segment, however. Joined with the Corolla (as Toyota does it in the States), the 8th-best-selling car in Canada helps propel Toyota’s market share in the compact segment to nearly 20%. (This doesn’t include irregulars like the Kia Soul or Chevrolet HHR, seen here.) Indeed, the Toyota Matrix is a major player in the Canadian automotive market, a vehicle so appealing that it’s twin, the Pontiac Vibe, sold 297 units in May despite existing as part of a defunct brand. 297 Vibes is, if you couldn’t figure it out for yourself, more than 275 or 217, the numbers put up by the Toyota Prius and Honda Insight, respectively.
Year-to-date, the Honda Civic is ahead of the Mazda 3 by 218 sales. 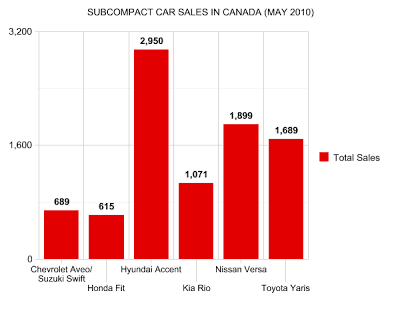 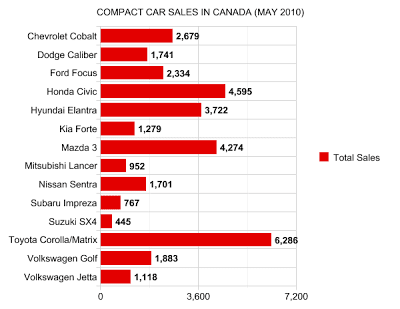