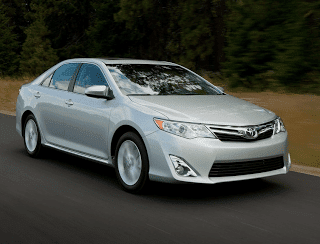 The Toyota Camry was the best-selling car in America in 2013, the twelfth such year the Camry has achieved best seller status in the last twelve years. The Honda Accord trailed the Camry by 41,806 sales, a much tighter gap than the 73,014-unit differential in 2012. Camry sales rose just 0.9% in 2013; Accord volume was up 10.5%.

Together, the Toyota and Honda brands account for one-fifth of the cars on this list of America’s 25 best-selling cars in 2013. The leading U.S. brand car was the sixth-ranked Ford Fusion, which led the Chevrolet Cruze by 47,056 units.

Germany’s Volkswagen brand landed its Jetta in twelfth spot and the Passat in 22nd. BMW’s 3-Series, with help from the renamed 4-Series two-door, was America’s 18th-best-selling car nameplate in 2013, thanks to a massive December push that saw it rise from 21st spot.

Source: Automakers & ANDC
^ Prius breakdown by variant
* BMW, not GoodCarBadCar, has chosen to combine the 3-Series and 4-Series in their monthly U.S. sales reports.