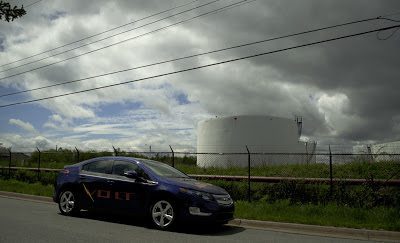 GM’s Chevrolet Volt has been hijacked by conversations involving monthly sales volume, government incentives, and the all-electric Nissan Leaf. Some of this is Chevrolet’s own fault. Much of the Canadian marketing is aspirational but vague. General Motors has ignored the Volt’s hatchback practicality. And dealer inventory is so weak that the car has been virtually invisible, a surefire way of turning hype into publicity suppression.

But if you are considering a new car purchase, does it matter how many dozen Volts have been sold? If you live in a jurisdiction where hybrid tax breaks aren’t offered, don’t you know better than to force wishful thinking? Surely you’re not about to be controlled by the power, or the lack of power, in a car commercial… right?

Why can’t the Chevrolet Volt simply be judged on its merits as a Chevrolet Volt? As a $41,545 car that could potentially save hundreds or even thousands of dollars at the fuel pump compared with, say, a $39,990 Mercedes-Benz C250 4Matic, is the Chevy Volt viable? Car ownership is about more than the Leaf’s headroom, it’s about more than the Volt’s lack of obvious visual environmentalism, it’s about more than philosophical differences between an ICE-powered car or an electric car or a car that combines the two. That stuff is secondary and mostly subjective. First and foremost, the Chevrolet Volt must be a car you’ll want to drive on a daily basis. 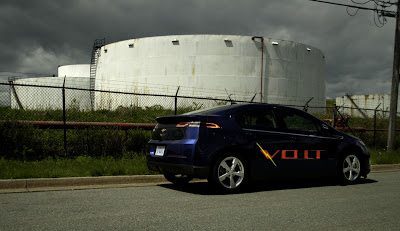 To discover the plug-in’s on-road feel, I met up with Carolyn McLelan, a Volt expert across the harbour at McPhee Chevrolet in Dartmouth. As she told me more about the technical side of the Volt and what it’s like to sell the car in this somewhat traditional and very cautious market, I drove the car to an oil refinery, partly because the route would offer us a multitude of different driving scenarios; partly because an electric car with a range extending powerplant would pose nicely for pictures when parked alongside an oil tank farm.

The Mi’kmaq call the harbour in Halifax Chebookt. The Imperial Oil refinery sits along the shore in Woodside, not far from where the Shubenacadie Canal empties into Chebookt. Before John Wentworth had it turned into a canal, the cross-province waterway was vital to Mi’kmaq commerce. This was going on hundreds of years before the refinery devastated the beautiful local landscape in 1918. For more than one reason, Imperial Oil is attempting to sell or, more likely, shut down the refinery as operating the facilitity no longer makes good business sense. Let’s not exaggerate: Big Oil didn’t choose to shutter the Dartmouth refinery in response to the Chevrolet Volt. But it sure does feel good to cruise down Pleasant Street in pure electric mode while the only petrol worth mentioning is being produced on the other side of the fence, rather than being consumed on the road.

The result of driving a 2012 Chevrolet Volt to the refinery? This review, which starts in earnest after the jump. 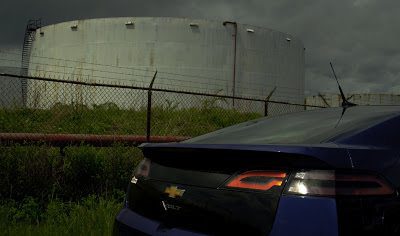 A typical customer will spend a few minutes exploring a car before they anxiously set off. This is when the Volt’s spacious seats-down cargo area impresses, but it’s also when you experience what it’s like to remove yourself from the rear seat. There’s a decent amount of space back there, but the seat back is angled just right for guys who used to drive their ’92 Civics in permanently reclined fashion. Removing yourself from that position is awkward, especially when it comes to feet extraction. Up front, the control stack is attractive, so much so that your dismay over the inevitably filthy white surround will be all the worse. Elbow room is sufficient enough to provide a buffer zone from the passenger one seat over. The two main screens will take some time to learn but use big text to help eyes as bad as mine. Overall, things feel nice, from the wheel to the shifter to the cloth seats. Maybe not $41,000 nice. But nice. 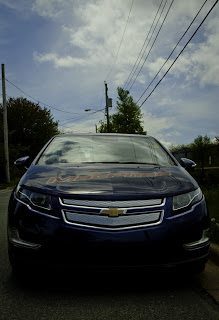 Many aspects of the Volt take the hybrid concept to the extreme. This sounds obvious, but I’m not referring to the powertrain engineering. From a noise, vibration, and harshness perspective, the Volt is especially eerily electric. In so many ways, when driving the Volt, nothing happens. Nothing ever happens.

Initially, lights come on inside and out, but there’s no sound. And then the car accelerates, quite nicely, but it’s hard to sense speed without watching the scenery disappear out the side window. There’s certainly nothing to hear. There’s no increase in vibration. And those dashboard buttons are hard for the driver to locate when on the move. As often as not, this means you’ll press nothing, no button at all. So nothing happens. At least the buttons look good, as does the glossy white surround.

At its very core, the Chevrolet Volt is weirdly wonderful. The absence of traditional ignition is sheer bliss. The way all 273 silent torques come alive and flow together in one constant stream is enveloping. This torque will make you want to drive the Volt fast. You will give in to this urge, because, why not? At this moment you’re not using a drop of gasoline. During a suburban commute, one filled with opportunities for braking (which also recharges the battery to assist the true charger, the 1.4L engine), you may never require fuel.

Not unexpectedly, 435 pounds of battery makes the Volt feel like a heavy car, but it copes nicely and feels a bit Cruze-like, apart from the disconnected video game steering feel and the oh-so-connected electrified torque. I won’t go so far as to say the Volt takes a corner like we hope the Chevrolet Code 130R will in the future. It handles like a good normal car and its ride – the way it copes with bumps and dips and potholes – is barely on the firm side of peaceful.

Effectively, the Chevrolet Volt is thoroughly composed for a first-generation plug-in electric, a car we had high expectations for technically, but not so much dynamically.

Preconceived notions will have a bigger impact during your first Chevrolet Volt drive than on perhaps any other new car test. I expected the Volt to feel more like the painfully hybridized Chevrolet Tahoe than the smooth Chevrolet Cruze. Yet it won out and exceeded my expectations. I would never have believed, no matter what other reviewers said, that the Volt would be a riot to drive. Expecting to like the car because of the general concept and newfangled technology, I ended up enjoying it because the Volt is a sincerely good car to pilot and live with. And because electric torque may just be the best kind of torque.

Appealing though the Chevrolet’s fuel-saving nature may be, this becomes nothing more than pleasing background noise as its overarching regularity and its dearth of eccentricity take precedence. There’s no doubt this eclectic Bowtie is an expensive way to save money. For those of some means who find it the least bit interesting, the 2012 Chevrolet Volt will likely prove irresistible.

Thanks to Carolyn McLelan – @iTeedee on Twitter – for setting up a Volt drive in an area where the car remains very rare.