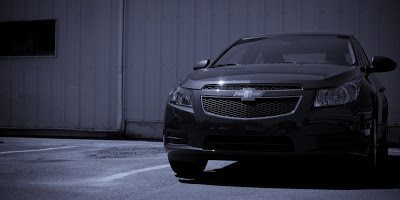 Landing one’s rear in the front seat of a Chevrolet Citation, Cavalier, or Cobalt was punishment. I don’t know what you did wrong, but it must have been something pretty bad. At the very least, with the Cobalt, owners committed the sin of omission, omitting a bunch of superior compact cars from their drive-before-you-buy list.

The Chevrolet Cruze is not punishment, nor is it punishing. The 2012 Chevrolet Cruze LT Turbo isn’t stylish like a Ford Focus Titanium Hatchback. It doesn’t steer like a Volkswagen Golf. It doesn’t have the interior practicality of a Kia Soul. Yet there is perhaps no car that deserves as strong a recommendation for former owners of large and midsize sedans who are looking to downsize.

The Cruze’s demeanor is relaxed. It has the benefit of being much smaller and inevitably more agile than a car like, say, the Chevrolet Impala, but it’s still the comfortable, mature cruiser in the compact segment. In comparison, the Toyota Corolla feels rigid; the Kia Forte unrefined; the Volkswagen Golf overpriced; the Buick Verano old-fangled. The insides of Honda’s Civic seem so plain, so two-generations-ago. The Ford Focus’s driver’s compartment is claustrophobic. The Hyundai Elantra’s ride is a touch too busy.

Ah, the Chevrolet Cruze’s ride control. If there is one thing that might cause you to consider the purchase of the second-smallest Chevy sedan, it is the car’s ability to isolate you from the road. The meat of GoodCarBadCar’s 2012 Chevrolet Cruze LT Turbo review begins after the jump.

Don’t deny the Cruze is boring. Its exterior lines are clean but not enticing. Interior quality is light years ahead of what General Motors was doing in the Cobalt and Pontiac G5, but there’s nothing unique to be seen. More to the point, delivery from the 1.4L turbocharged 4-cylinder is decidedly similar to the delivery of a 1.8L naturally-aspirated 4-cylinder, few of which have ever been anything but, well, normal. Teaming up with the 6-speed automatic, the turbocharged powerplant does seem to deliver more outright punch than expected.

Had the Cobalt simply been fitted with this engine/transmission combo, it would have at least been an understandable purchase.

The Cruze handles corners, but it desperately feels like it needs to lose 400 pounds if it’s ever to be fun in SS trim. The weight shifts to the outside front wheel in a lunge, and a second change of direction causes the Cruze to feel like even more weight loss is required.

Although it’s not in its element when accelerating or tackling the twisties, the Cruze proves to be a loyal companion in a number of different circumstances. Over the course of an extended long weekend, we drove our Cruze tester extensively in the city and on the highway with five aboard. Halifax city streets are not known for their smoothness. Yet in this urban environment that offered up a mighty challenge to the Jeep Wrangler and, to some degree, exposed the Fiat 500 Sport, the Cruze was unaware of any difficulty. And visibility, though not Wrangler or Cinquecento-like, is tolerable, even when parking downtown with three heads sticking up in the rear seat.

Ride quality isn’t measured by a car’s ability to float. Not only do I want a car to mask a bump, I want its secondary reaction to be a levelling off, a settling of accounts among all four wheels. Any surprising impact on our rough Nova Scotian highways was handled with aplomb, to quote popular automotive journalist parlance. Highway driving highlights the Cruze Turbo’s ability to make the NVH work that was done on the Cobalt seem like it was orchestrated by an infiltrator from Honda who was determined to keep the Cobalt’s noise, vibration, and harshness levels as close to the Cavalier’s as possible.

We drove the Cruze to Rainbow Haven beach outside the city. This requires a little less than two kilometres of traversing a rough road covered by large chunks of tire-puncturing gravel. A stormy winter creates craters that swallow Vespas. Of course the Cruze let in more noise at Rainbow Haven, but that’s it, just the increased decibels from the gravel road. Increased speed didn’t seem to deter the Cruze’s suspension from passionately seeking serenity. And the stereo was pretty decent, a big plus on beach days.

It wasn’t the small Chevy’s lack of stunning style or dynamic failings or even its down home American badge (my peers drive Mazdas, Hondas, BMWs, Hyundais, and Subarus) that let us down, however. Forget manufacturer-supplied dimensions and actually live in a car if you want to discover how big, or in this case, how small it really is. And the Cruze – apparently two cubic feet larger than the sixth-gen Volkswagen Golf in the passenger compartment, a bit bigger than the current Civic sedan, and one cubic foot smaller than the Hyundai Elantra – felt much smaller than all three with five aboard.

My niece struggled to get at the annoying seat belt buckles. Her aunt’s brother-in-law was forced to pull the passenger seat forward to make room for his little sister in the back. She was squeezed against her door by my niece’s booster seat. Five up in a Golf is doable. In the Civic it’s not pleasant, but it’s better than the Cruze. Meanwhile the Elantra feels an awful lot like a midsize car when passengers are crammed inside. Yeah, we had some stuff with us, and the big trunk did a good job of swallowing it. But the Cruze just wasn’t a family car. It wasn’t close to being a family car, not by our family’s definition.

So why the recommendation for buyers looking to downsize? For one thing, a consumer looking to upsize from a subcompact won’t find that there’s much upsizing going on. However, a downsizing consumer knows, quite obviously, that the car will in fact be smaller than their last.

Recently retired empty-nesters who no longer require an Explorer or Malibu will enjoy the Cruze’s big car ride quality, and they won’t be as likely to suffer from the Cruze’s shortfalls. A childless young couple won’t have a problem making room for two friends on their way to the movies, either. There would be no need for such buyers to endure the pain inflicted on them by a small crossover’s disappointing real world fuel economy, particularly when they can have a very mature, nicely equipped car for less money.

What the 2012 Chevrolet Cruze does well, it does very, very well. It’s a long way from perfect, and when pushed, it doesn’t drive down the road at best-in-class pace. But for a car owner who doesn’t take driving too seriously, who wants a faux big car, there’s nothing quite like it. Car guys, however, need not apply.