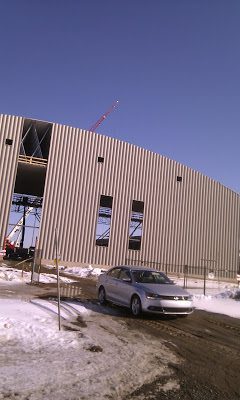 Meet the modern pickup. You’ve probably heard it referred to as the 2011 Volkswagen Jetta TDI.

There was a time when pickup trucks weren’t styled to the hilt. Time was, trucks weren’t luxurious, constantly reengineered, or anything but utilitarian. Pickup trucks, you see, picked things up. Pickup trucks carried things around. They helped a large group of people do their work. The quality of a truck’s interior plastic wasn’t debated, nor was there any doubt that torque was far more relevant than horsepower. Fast forward to 2011: trucks are still used by the workin’ man, but we don’t view trucks as vehicles built exclusively for the job site.

That’s where the diesel-powered 2011 Jetta enters the conversation, not as a punchline to a truck joke but in order to pay compliments. It’s true, Volkswagen didn’t bother styling the Jetta. That much is apparent with one quick glance. Inside, you’ll find what you need, but luxury car fittings are not included. Carrying things, people, stuff, junk, and miscellaneous clutter all at the same time is easy like Sunday morning. And torque? Uh…. yeah, there’s some of that; 236 lb-ft of blissfully plateaued torque from 1750 rpm.

With all this in mind, there seemed to be no better way to review the 2011 Volkswagen Jetta than by driving to its new domain, the site where Soccer Nova Scotia is building a new indoor complex on Halifax’s Mainland Common via the South End Container Terminal. Keep reading to see how the Jetta got on.

Obviously, there’s a thick coating of hyperbole in all this. The Jetta is a German sedan, y’all. Also, GoodCarBadCar.net parked the Jetta TDI in the driveway of SNS’s new building. Hillcrest Volkswagen’s $23,875 2011 Jetta TDI Comfortline was not loaded up with cement. Nevertheless, the Jetta’s workmanlike character comes through conspicuously.

That point was made all the clearer when I discovered how few pennies Volkswagen spent on the heater controls. Switching blower direction involves finagling a Fisher Priceesque knob. Yet all the complaints from other sources you’ve heard regarding the sixth-generation Jetta shouldn’t have amounted to much more than crying over a lack of interior flair and a few chintzy parts. Surfaces an owner touches most frequently – steering wheel, shift knob, blinker and headlight stalks – were more than nice enough in this mid-range Comfortline. (Non-diesel Jettas start at Trendline and go up to Highline. Base TDI Jettas are Comfortlines, a step up from Trendline. U.S. trims are different in configuration and name.)

Turbodiesels are increasingly less love’em or hate’em. Quiet, smooth, and a little more revvy than former applications, the 2011 Jetta’s 140-horsepower 2.0L diesel makes this car enjoyable. The Jetta is nothing more than boring to look at, nothing more than absurdly roomy and comfortable inside, certainly not exceptionally dynamic, but it remains downright charming when running it through the gears.

It’s not that the shifter itself is anything special – a mite notchy with an easily modulated clutch. The 2.0L turbo’s swell of torque is just so pronounced, level, ambitious, and generous I started to think I was driving an honestly fast car. Through all this, there’s ever-present knowledge of insane fuel economy. America’s EPA rates the Jetta TDI at 30/42 mpg; Canada’s OEE calls it 6.7/4.6 L/100km, all of which are enchanting figures when feeling the engine’s considerable shove. Lose the engine as cause for celebration and what does the Jetta have left?

We’ve already mentioned the enormous quanitites of space, but perhaps numbers are needed for enlightenment. Inside, both in the cargo compartment and the cabin, the 2011 Jetta is vast. At 15.5 cubic feet, the trunk is more than a cubic foot larger than the booty on Toyota’s Avalon. Compared with the 2011 Hyundai Elantra, previously thought to be loungelike, rear legroom is five inches greater.  The seat fabric was clingy and foot-level panels and materials were scuffing like the boards of a 50-year-old hockey rink. Other than that, sitting back for a long-distance journey in the new Jetta is like walking in late to an early screening of Avatar and discovering a vacant seat on the aisle, mid-way up: necessary and comfortable.

Why so necessary? Let’s take up the diesel topic for another moment. The TDI’s fuel tank holds 55 litres of fuel. Let’s assume you won’t quite achieve Natural Resources Canada’s 4.6 L/100km efficiency rating. Rounded off to 5 L/100km, the Jetta TDI has an anticipated bladder bursting range of 1080 kilometres…. with a litre to spare. If you’re going to make it from Winnipeg, Manitoba, to Lincoln, Nebraska, without stopping you’ll come to appreciate those comfortable seats, far more accepting of my frame than the Elantra’s I drove the day before.

Now back to the trunk. Not only is it expansive, it’s expansive in all the right directions, squared off like the bed of a pickup truck. Also like a truck, the Jetta’s ride isn’t harsh over roads treated terribly by Halifax’s temperature fluctuations. Pretending or attempting to be a sporty car wouldn’t be in keeping with the Jetta’s mission to get the freakin’ job done. The 2011 Jetta won’t connect with its driver on a twisty road like a Volkswagen GTI would, but a pickup owner wouldn’t want that. After all, you get what you pay for, and if you pay for sporty dynamics and a high-strung engine, you get a stiff ride and worse fuel economy.

If we forgive, excuse, or praise all of the Jetta’s practical components, we’re still left with the fact that Jetta designers went AWOL. Clearly, the lack of design fortitude hasn’t been a problem for thousands of new owners who’ve collectively made the sixth-gen Jetta a sales success. Volume is high, Volkswagen HQ is happy. For those potential buyers who fight past the blase front end, apathetic profile, and classy-but-conventional rear to take the Jetta TDI for a test drive, they’ll uncover an awfully appealing car.

Looking out the living room’s bay window at a driveway housing the 2011 Volkswagen Jetta TDI must still be a strangely detached experience. At least that’d be the case prior to ignition, up until the left lane is chosen on a two-lane on-ramp, in advance of four happily comfortable people loading all their stuff in the Jetta’s trunk and driving to the opposite side of the continent.

I’ll acknowledge the Jetta’s workplace may ideally be the highway, not a massive building site. This won’t stop me from thinking of this latest Volkswagen sedan as a hard-working, gun-toting, know-it-all farmhand in a Louis L’Amour western; as a pickup for a new era in which we all track the price of crude on the New York Mercantile Exchange.