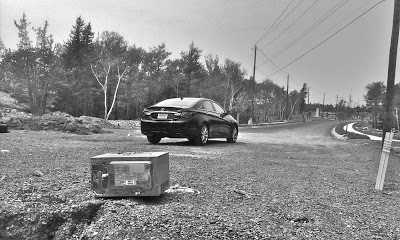 Reviewing the very quick, rather luxurious, and relatively handsome 2011 Hyundai Sonata 2.0T Limited is an exercise in avoiding excessive references to those three subjects. The Sonata is quick. It is loaded. It looks freaking good.

We could spend many paragraphs discussing the impact of the Sonata’s turbocharged 2.0L and its 274 horsepower; 269 lb-ft output. Then we’d move along to the part of the conversation where we’d go on and on about the wide angle of the rear-view camera, the spaciousness of the heated rear seats. Hundreds of words later it would finally be time to address the artistry of those aggressive wheels.

But you already knew the turbocharged Sonata was stupendously motivational. The torque plateau stretches from 1800-4500 rpm, and the feeling at about 3800 revs is assertive yet pleasantly relaxed. Speed is easy in this car. And this is the Limited with Navigation, a $33,499 car in Canada, so you anticipated a quality interior. The exterior, of course, is the aspect with which you’ve grown the most accustomed. Whether you like it or not, there’s no denying it has personality, and most of its rivals don’t.

Does the Sonata 2.0T provoke enough of a response in the viscera to make you want one? Is there enough performance present to consider the midsize Hyundai turbo a performance sedan? If not, or even if so, is there more to the 2011 Hyundai Sonata 2.0T Limited than a wonderful engine? Read GoodCarBadCar.net’s review after the jump.

Let’s begin by answering the third question. Inside the Sonata, the seats are comfortable, rear leg room is plentiful, and the overall design is attractive and functional. But to say the Sonata 2.0T is more than an engine and defend that belief by describing the interior would miss the point. That’s because the Sonata’s 2.0L turbo is itself more than just a high-horsepower ringer under the hood of an Accord/Camry alternative.

By times the mid-range torque transforms the Sonata into an old-fashioned American cruiser. It also has an appetite for revs, thriving when go-pedal marries carpet. And when it isn’t pushed, this is a car which, in MY2012, will be rated at an incredible 34 miles per gallon, up one from the MY2011 2.0T. Is the Sonata 2.0T an engine, nothing more? Well, if so, it’s three engines in one.

To call the 2011 Hyundai Sonata 2.0T Limited a sports sedan in the same vein as the BMW 3-Series would be a mistake, however. Sportiness requires, quite frankly, more than speed. The 2.0T has both speed, sure, and an ability to really grip, but it’s not a small car, and it isn’t all that comfortable being pushed harder, and then harder again around roundabouts. Have some discretion, ease off slightly; and the Sonata is converted back into elegant cruise mode, where the ride is always unaffected and a simple squirt of the throttle never results in torque steer.

In other words, take corners like you would in a 323i and you’ll probably be sufficiently impressed – most certainly with the way the Sonata pulls out of those corners. Drive like you’re in an M3 and you’ll think the Sonata 2.0T lacks finish. The steering, for example, alerts you to nothing and possesses a larger dead zone on centre than I’d expect to find in a 5-year old pickup truck.

Finally, determining the response this child of the Stellar conjures up is easy. I want one.

If, after driving a turbocharged Sonata, you don’t want one, it’ll be because you want a totally different type of vehicle, or because you’re willing to pay a lot more money. In the Sonata’s segment, rivals for this top-of-the-line car include the $35,390 Honda Accord EX-L V6 Navi and the $38,340 nav-equipped Toyota Camry XLE V6. Another Canadian favourite, the Ford Fusion, is $32,099 when the SEL V6 is fitted with navigation. Keeping it in the Korean family, the Kia Optima SX has a $33,695 MSRP. Up a notch in prestige but down in power, the BMW 323i starts at $34,900, and the Mercedes-Benz C250 bases at $38,800.

Then again, you could have the Sonata 2.0T without leather and high-tech kit for just $28,999, or without navigation and the rear-view monitor for $31,749.

Regardless, most traditional 2.0T alternatives aren’t exciting. They fail to spark an ounce of yearning. That the 2011 Hyundai Sonata 2.0T is a mainstream midsize sedan you’ll want at all is an achievement. That the engine, of all things, might make you want it badly is a testament to Hyundai’s rapid ascendency, the sort of climb which results from being able to play much more than just the value card.

Thanks to Steele Hyundai in Halifax, Nova Scotia, and
Bob Brown for arranging this 2011 Hyundai Sonata 2.0T test drive.