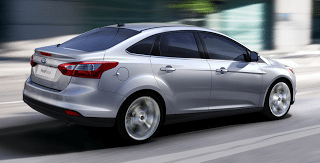 Be ye pleasantly surprised. Ford’s North American Focus is a tired example of what was, at one time, a design paragon. Inventive, dramatic, and modern; the Ford Focus we received a decade ago was initially tarnished by poor reliability (in North America, but not Europe) and is now marred by poor attempts to re-work its styling.

However, the Ford Focus still sells rather well, not at Civic or Corolla levels, but quite fairly for a car that hasn’t been reengineered… ever. Ford of Europe debuted a new Focus and rejiggered it once in the time Ford of North America upgraded the initial Focus by doing nothing more than offering SYNC. Well, Ford is going back to the Focus’s roots and providing the same car – globally – built on on identical manufacturing lines France, Russia, China, and Michigan.

Ignore what’s under the surface for a few months – this car is a ways off still. There’s plenty of time to peruse the details. In light of the staid Corolla and the Civic to which we’re accustomed, the 2011 Ford Focus hatchback and sedan are jaw-droppers. The Chevrolet Cruze looks nice, but beside the Focus, the Chevy lacks class and flair. The Focus’s grille says, “Ford”, but doesn’t scream it. The crease which flows more noticeably on the sedan’s flanks, above the rear wheel well in v2.0 of what began ahead of the front door makes the Focus sedan look larger (in a good way) and of a class above its main rivals. Its wrap-around taillights help to make the design more cohesive.
Inside the Focus is top-notch stuff. You wouldn’t think Civic or Corolla competitor at first glance. 3-Series and A4 would more likely come to mind. Of course, the Focus will be available in trims beneath the early examples pictured in the Galleries below, sans lovely wheels and chrome window surrounds and navigation and leather seating. Perhaps then we will conclude the Focus is just like all the others: a somewhat attractive small car bound to a measure of success before suffering through years of neglect.
Or perhaps we’ll see the best-looking C segment car on the market, a car which could become America’s next Toyota Camry as fuel prices rise, emissions regulations tighten, and North Americans decide to stop buying cars based on the size of the vehicle’s footprint but rather based on its ability to meet a family’s needs.
Styling Points +
Profile view of both sedan and hatchback is excellent
Interior is like the 10 year-old in high school – he skipped a few grades
Front end is strong and powerful but not overbearing
Styling Points –
Hatchback not as visually arresting, at least in pictures
Triangular air intakes at the front don’t fit
Why doesn’t the Ford badge fit in the grille without bulging into the hood?