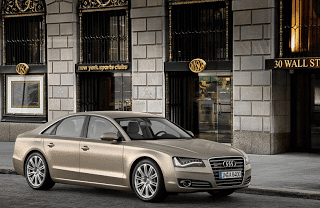 Miami hosted the introduction of Audi’s 2011 A8 last night. A huge selection of pictures are now available in the Gallery below, along with a brief outline of specs and dimensions.

The third-generation Audi A8 is longer and wider than its predecessor on a wheelbase that stretches 117.7 inches. Each headlight includes 22 white LEDs and 22 yellow LEDs. Audi will be continuing with aluminum space frame technology for the A8, a weight-saving advantage which is necessary to offset heaviness incurred by Quattro all-wheel drive. The interior, says Audi, is a “wellness lounge for the senses” – a very catchy and believable turn of phrase. Audi interiors are always top-notch, and the A8 is a top-notch Audi. We expect greatness inside. Although Audi doesn’t appear to have moved the game on substantially, the A8’s innards are lovely and the centre tunnel (including the shifter) is truly eye-catching.
Luggage capacity of 18 cubic feet is no joke. That’s more than Mercedes-Benz offers in the S-Class; substantially more than BMW provides 7-Series owners. Horsepower stats come with a big number, too: 372-bhp generated by a 4.2L V8. Anticipate a hybrid, W12, or alternative fuel and diesel options in the relatively near future. Audi uses direct-injection in this V8 and links up with an 8-speed automatic which sends 60% of the power to the rear wheels in normal operation.
Check out GoodCarBadCar.net Renderings of an Audi A8 Hatch & Wagon

An exhaustive array of safety and “assistance” systems will be standard fit with the A8 when it goes on sale later in the new year. What really sets one uber-luxury sedan apart from another, however, isn’t the array of acronyms or the best of beastly powertrains or even the loveliness of the logo. In this market, style is a major consideration.
From the front, this is typical new millennium Audi. The gigantic grille dominates the scene even though nobody’s about to miss spotting those headlights, either. Viewed from the rear, the big brute of an Audi loses much of its charisma but still possesses a clean look, not deviating too far from the older A8’s design. Unfortunately, it’s in the profile view – the most important angle in my mind – where the A8’s designers let their foot fall off the gas. See, Audi has a basic design credo that places the beltline at an approximate height and generally appropriates the proportions. Outside of that, one expects artistic flair to take over. Between the A8’s wheels, the flanks appear to sag as a result of an amalgam of factors. One swooping line this way poses shadow issues that way and eventually we notice what feels like the weight of the doors pulling the car down just aft of the door line.
See how Audi’s sales compare with its competitors in the USA
Whether or not every subjective eye will agree with that analysis, the 2011 Audi A8 is very good-looking car. In fact, the A8 may be more traditionally attractive than its competition. That being said, it’s my belief that the 2011 Audi A8 does not look as expensive as the Mercedes-Benz S-Class or BMW 7-Series. The Lexus LS and Jaguar XJ lack in that department to an even greater degree. Make up your own mind by inspecting the photos below. You like? Feel free to spend around $80,000 on a new A8 4.2 as an early Christmas present next year.