Seeing as how Toyota is making a very unconscious effort to market the Land Cruiser to Canadians, we’ll forgive the exclusivity. When perusing this month’s Graph, keep in mind the large black pie slice belongs to two vehicles; one of which likely sells very little. The old-style Mercedes-Benz G-Wagen is linked up with the new GL-Class by Mercedes-Benz Canada. (Mercedes-Benz Canada also hands out sales figures with combined stats for the S-Class and CL-Class as well as the E-Class and CLS-Class.) It’s safe to say the Escalade and GL-Class Benz are competing over most large luxury SUV sales in Canada, or at least did so in April. Range Rover sales, by the way, were way up in April and are way up for the year, too. A 58.1% increase over 2009 thanks to a revamped engine lineup is quite something for an aging vehicle. 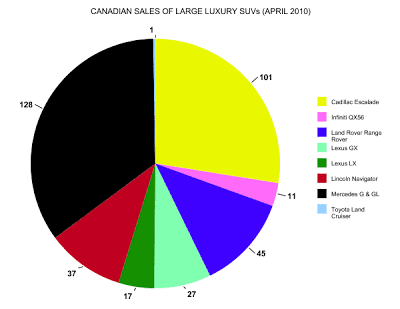