Canadians flock to the Ford Escape as though the small Ford SUV comes with free tickets to an NHL Stanley Cup playoffs game. In truth, if everybody who bought a Ford Escape in 2009 showed up to any of the NHL’s six Canadian arenas, there wouldn’t be enough space to hold ’em all. The next-best seller in Canada from last year was more than 11,000 sales behind, and America’s best-selling SUV sold at just half the rate of the Ford Escape.

Ford generates activity in the Escape section of their showrooms with attractive pricing and a vehicle that was, when it debuted, superior dynamically. That may not be the case anymore, but the Escape isn’t as antiquated a vehicle as many decade-old designs. Are there better options for Canadian cute-ute buyers? Oh yeah; whether it be the Hyundai Santa fe, Toyota RAV4, Honda CR-V, or the Subaru Forester. You can still count on huge Ford Escape sales next year, however. 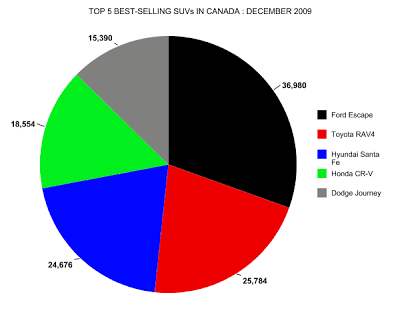